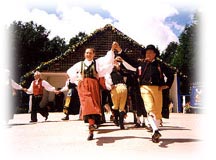 NORDISKA BEGAN when the late Gordon Ekvall Tracie founded Skandia Folkdance Club in 1949 (later named Skandia Folkdance Society), along with an unnamed performance wing. In 1952, Gordon officially named the wing "Nordiska Folkdancers" and designated the group as a separate, sister organization to Skandia. Today, Nordiska's membership includes charter members who have been with Nordiska since 1949, and many who have been with Nordiska more than twenty years (both categories something of a record for performance groups), plus newer, younger members who are discovering the joys of these traditions. To this day, Nordiska has maintained the philosophy and standards with which Gordon Tracie began the group: that Scandinavian music and dance traditions should be preserved and presented as authentically as possible; and that these marvelous expressions of Scandinavian cultures are to be enjoyed!